Another key strength of Fuji Oil is its initiatives to ensure safe and stable operations.
Since the Sodegaura Refinery came on stream in 1968, ensuring safety has been one of our fundamental principles. Our corporate vision also emphasizes “safety first.”

Safety initiatives that target facilities and systems are important, but these efforts are insufficient on their own. Without skilled personnel assets* to make full use of these improvements, cutting-edge facilities are meaningless.

To ensure safe and reliable operations at our Sodegaura Refinery, we therefore implement initiatives at an infrastructure level (facilities and systems) and at a personnel level. In this section, we look in more detail at some of these safety initiatives.

* We refer to our human resources as an asset, because we believe our workforce is one of our most important resources.

The Sodegaura Refinery control rooms, which were dispersed over four different areas, were integrated into a single location in 2009. Operation control systems were also integrated. The aim of the integration was to make information more centralized and accessible, allowing faster sharing of key data. This helped to create a system of cooperation among the entire operating division and strengthened systems for efficiency, safety and stable operations.

Thanks to the integrated control room, after the Great East Japan Earthquake of March 11, 2011 we were able to act with precision and speed to carry out inspections and respond to changes in operations. As a result, there were no accidents or disruptions at the refinery, allowing operations to continue as normal at near full capacity.

Processing units in the refinery are shut down during major earthquakes and other emergencies.
These units contain a large volume of flammable gas. The refinery therefore requires an advanced system that can safely vent the gas while rapidly shutting down facilities.
The Sodegaura Refinery has been one of the first in the industry to introduce an electronic control system based on safety logic that meets international safety standards. This system has been incorporated into emergency shutdown programs for individual units and is part of a comprehensive emergency shutdown and venting system for the whole refinery, which automatically activates in the event of a large earthquake. These systems ensure all units are shutdown safely and automatically during an emergency such as a major earthquake.

A network of power, communication and other cables stretches throughout the Sodegaura Refinery, resembling the nerves of a human body. LAN cables that connect directly to the integrated control room are especially vital. At the Sodegaura Refinery we have created a backup network of important cables, with each network following separate routes to the control room. This means refinery control can continue as normal using the backup network if the primary set of wires is cut due to an accident or other event.

In the past, all the processing units in the refinery had to be shut down every year for scheduled maintenance. However, our facilities are now allowed to operate for four consecutive years without maintenance. An aircraft is at the greatest risk of an accident when taking off and landing. Plant equipment is similar in that it faces the highest risk of an accident during startup or shutdown.
A lack of experience in shutting down or starting up equipment therefore leads to greater risk in an emergency.
To counter this issue, we have installed a dynamic training simulator at our Sodegaura Refinery. Similar to a flight simulator, this system gives our personnel more experience in controlling the refinery in a simulated environment. This training means our personnel are always ready to shutdown and startup refinery processing units and respond to any trouble that may arise.

Together with integration of the control room and related systems in 2009, the six departments in the operating division at the Sodegaura Refinery were realigned into three groups. Each group now has more personnel, enhancing its ability to deal with emergency situations. This new organization is also effective in supporting the transfer of technical expertise between personnel. Coupled with the integration of the control room, this has resulted in a less complicated organization that enables information to be shared and transferred more rapidly. (As mentioned earlier, this proved to be highly beneficial during the Great East Japan Earthquake).
However, the reorganization meant that each group became responsible for roughly double the amount of units than under the previous structure, which initially presented significant challenges for operators. The operators also had to familiarize themselves with different types of equipment. We therefore set up a four-year training program, which we began implementing in 2009 after the reorganization.

Today, our operators have a broader understanding of the refinery’s facilities.
Their expertise plays a key role in ensuring safe, stable and efficient operations.

2. Transforming our operators into operation engineers

Operators are responsible for more than simply running the refinery’s equipment. Our goal is to train engineers who can think independently and develop better approaches.
Fulfilling a vital role in ensuring safe, stable operations, these employees are operation engineers, rather than just operators. 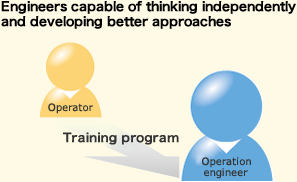 The Sodegaura Refinery handles dangerous materials, so the risk of leakage from corroded pipes could present serious problems. Our maintenance division carries out thorough inspections of the pipe work in the refinery as a matter of course, but the pipe network is extensive, so it is impossible to monitor every inch of the facility.
Therefore, using a diagram of areas at special risk of corrosion, prepared jointly with the maintenance division and the operating division, we voluntarily carry out regular and comprehensive external corrosion inspections. These inspections enable early detection of corrosion and are vital for ensuring safe and stable operations.

4. Our people are our greatest asset

So far we have focused on initiatives in our operating division, but the maintenance, safety and environment, and management divisions, which support the operating division, also make significant contributions to ensuring safe and stable operations. One example is our Comprehensive Powerplay Inspection, where employees in all the refinery’s departments inspect facilities and clean processing areas once every month. Other company-wide initiatives targeting safe and stable operations include near-miss incident initiatives, danger awareness initiatives, accident and disaster-free campaigns and disaster prevention drills.
These initiatives are underpinned by the belief that our people are our greatest asset.

Fuji Oil works to achieve global standards in production technology in order to boost competitiveness and efficiency. This approach is being implemented at both the infrastructure level and the personnel level.

Inside our integrated control room

Oil refineries are required to process various types of crude oil. Processing different grades of crude oil requires time-consuming adjustments to operations, resulting in lost production. At the Sodegaura Refinery, we have built a multi-tank system to blend crude oil. By adjusting the properties of the crude oil before it is processed, we can shorten the time needed to reset processing equipment, leading to more stable operations.

Oil refineries use a variety of equipment to create petroleum products. They therefore need to store a large amount of intermediate (semi-finished) products, as well as a large number of tanks in which to keep these products. At the Sodegaura Refinery, we have introduced a crude oil blending system and other advanced control systems, which reduce production losses from the processing stage right through to shipment. We have also reduced the number of intermediate storage tanks. In addition to minimizing losses, we also aim to improve our strategic approach by recommissioning surplus intermediate tanks as new shipment tanks.

The creation of an integrated control room has made information more centralized and accessible, helping to encourage greater cooperation across the production division. This has made a significant contribution to improvements in refinery operating efficiency.

In oil refinery operations, changes in the type of crude oil being processed or in the type of petroleum product being created necessitate adjustments to operations. However, these adjustments take time, resulting in production losses. To counter this problem, we have installed advanced control systems on each piece of processing equipment, which reduces the time needed for adjustments, thereby minimizing losses and also allowing a reduction in the number of intermediate tanks.

Fuji Oil has introduced an Operations Intelligence System called XHQ. The system allows the headquarters, as well as the Sodegaura Refinery, to access detailed real-time data, enabling swift responses during an emergency.

Japanese oil refineries suffered significant damage during the Great East Japan Earthquake on March 11, 2011, with six of the nine refineries in the Tohoku and Kanto regions suspending operations. However, after the earthquake, the oil industry put aside company divisions to work together, restoring the supply system to near pre-earthquake levels in only three weeks. Considering the substantial amount of time that was required to restore other crucial infrastructure, this is testament to the convenience and advantage of oil as a key source of energy.

Although many refineries were forced to shut down after the Great East Japan Earthquake, the Sodegaura Refinery continued to operate at full capacity. We resumed shipments early the next day after the earthquake, fulfilling our commitment to clients to ensure stable supplies. Our ability to maintain supplies reflected initiatives to ensure safe and stable operations, which the whole company has worked to implement over the years, but it was also born out of our determination to overcome any challenge we face – an approach cultivated at Arabian Oil – and the motivation of every one of our employees to ensure a reliable supply of energy for Japan. This high level of motivation in our workforce also underpins our ability to ensure stable supplies on a daily basis, our competitiveness as a company, and our growth potential.

The energy sector in Japan continues to undergo drastic change, but oil remains the leading source of primary energy for the country. We believe oil will remain a key source of energy for many years to come.

Given this outlook, Fuji Oil will work to further enhance its competitiveness by continuing to ensure safe and stable operations as supplier of a key source of energy. Going forward, we will pursue strong and stable earnings both in Japan and overseas in order to maximize corporate value.