The Sodegaura Refinery, which handles our core business, began operations in 1968. The plant currently boasts a refining capacity of 143,000 barrels per day.
Although this amounts to only around 4% of Japan’s total refining capacity, the refinery’s efficiency far exceeds levels at competitors due to facilities and specialists capable of making every type of petroleum product.
One example is the refinery’s vacuum residue thermal cracking unit (Eureka Thermal Cracking Unit), which is the only one of its kind in the world. As crude oil used in refining processes becomes increasingly heavy, the technology offered by this efficient device is an important competitive advantage for Fuji Oil. The refinery is also skilled in the production of basic petrochemical feedstock and aims to add value to all of its products. 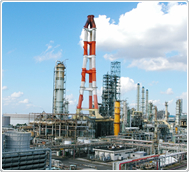 Most people know that petroleum products such as the gasoline and kerosene we use every day are produced from crude oil extracted from oil fields. However, the production processes that make this possible are less understood. First, crude oil is refined in a crude distillation unit (CDU), which separates the oil into LPG, naphtha, kerosene, diesel fuel and other petroleum fractions based on different boiling points. The remaining bottom residue becomes heavy fuel products or asphalt. This residue can be upgraded into high value-added lighter distillates using secondary facilities. 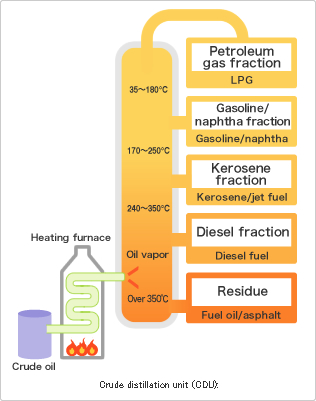 Heavy oil processing capacity is another key factor in oil refinery competitiveness. The characteristics of crude oil differ depending on the region where it was extracted. Crude oil is mainly classified as heavy oil or light oil according to its chemical composition and properties. The proportions of each type of petroleum products derived from crude oil depend on the type of crude oil used in the refining process. 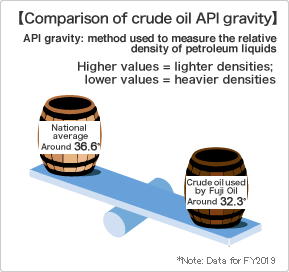 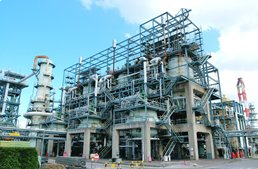 In particular the vacuum residue thermal cracking unit can take asphalt, one type of residue from the crude oil refining process, and further crack and refine it into fractions used in the production of gasoline and diesel. This has allowed us to reduce the ratio of residue after the distillation process from 21.5% to just 6%. Our industry-leading capacity in heavy fraction cracking equipment is one of Fuji Oil’s greatest advantages.